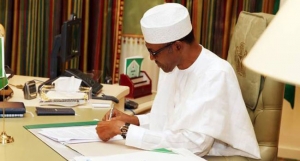 President Muhammadu Buhari has requested state governors to pay at least 25% of the refunds made to them from excess deductions for external debt service, to be used to settle outstanding workers’ entitlements.

The President made the call as he approved the sum of 552.74 billion naira to be paid in batches to all the states that are owed.

However, the states are expected to receive 25% of their approved sums in the first instance before the week runs out. There are about 33 states in the bracket.

A statement by his spokesman, Mr Garba Shehu, revealed that the refunds arose following the claims by the states that they had been overcharged in deductions for external debt service between 1995 and 2002.

In a directive through the Minister of Finance, Kemi Adeosun, President Buhari said that the issue of workers’ benefits, particularly salary and pensions must not be allowed to continue as a national problem and should be tackled with all the urgency that can be summoned.

When he assumed office in 2015, the President declared an emergency over unpaid salaries after he discovered that 27 out of Nigeria’s 36 states had fallen behind in payments to their workers, in some cases for up to a year.

Following this, a bailout loan was issued to the states twice with a first batch of about 300 billion naira given to them in 2015 in the form of soft loans.

The administration also got the Debt Management Office (DMO) to restructure their commercial loans of over 660 billion naira and extend the life span of the loans.

Because this did not succeed in pulling many of the states out of distress, the Federal Government consequently gave out an additional 90 billion naira to 22 states in 2016, as yet another bailout loans under very stringent conditions.

President Buhari has expressed the opinion all the time that the payment of salaries and pensions must be given priority to save both serving and retired workers and their families from distress.

Maryam Sanda Appeals Judgement Which Sentenced Her To Death

VIDEO: Buhari Will Not Resign Over Security Challenges – Lai Mohammed

All Kidnapped Children Will Be Freed From Boko Haram Shackles – Buhari