No Deaths Recorded As Three Vehicles Collide In Osun 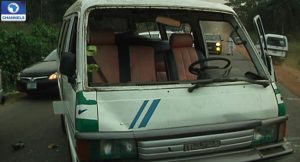 A fatal accident was averted on Friday night at Agunbelewo area in Osogbo, the Osun state capital, as three vehicles from two different directions collided.

An eye witness, Taiwo Elegbedede, who spoke to Channels Television, at the scene of the accident said the driver of the bus with registration number KEBBI-ZUR-545-AA was trying to manoeuvre the pot holes on his way when he suddenly drove onto the other lane facing an oncoming vehicle.

“The bus driver was trying to dodge the bad road and ran into the coaster coming from opposite direction. The driver of the coaster to me, saved the day with his experience, while the other coaster bus driver should just be thanking God for saving his life.

Another witness, a trader by the roadside, Mrs Ajayi, said: “I think the bus driver was drunk, because of the way he drove right into the lane of the coaster carrying pepper, or maybe he was only trying to dodge the pot hole. But, I don’t think any sane mind would ever do that, especially at this period”.

According to the witness, the drivers were seen engaging in war of words as to who should be held responsible for the damage done to their vehicles.

Meanwhile, a patrol team of the Osun state police command, arrived at the scene of the incident, minutes after and took all three drivers away in order to settle the dispute and avoid any further mishaps.

So far, no life was lost and no serious injury was recorded in the incident.