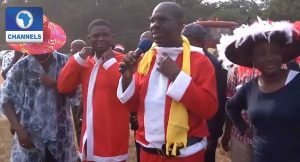 Edo State Governor, Godwin Obaseki, has appealed for more support for the internally displaced persons across Nigeria and particularly to those at the Christian Home for the Needy at Uhogua in Edo State.

The Governor made the appeal at a Christmas party organised for the IDPs by the state government in which the children were treated to a fun time.

The centre was converted to an amusement park with bouncing castles, fun rides and seesaws while the children and parents had a lot to eat, taking the foods from no less a person than the wives of the Governor and the Deputy.

The First Lady of Edo State, Mrs Betsy Obaseki, shared what inspired her to organise the party.

“The least we can do is to give of our time and resources and the life that God has put in every one of us to share with other humans especially those who are in need of it.  So that is what inspired this,” she said.

Wife of the Deputy Governor, Maryam Shaibu said: “The idea of coming here is nothing short of being with the children instead of bringing them out of here you know, just be with them and enjoy the day with them.”

While their wives spent time with the children, Governor Obaseki and the Deputy Governor were disguised as Santa Claus and handed out gifts to those below five years old.

The Governor later stepped out of Santa’s tent to greet them in the Santa Claus costume before unveiling himself.

While addressing the children, both the Governor and his deputy assured them of the care of the government.

Governor Obaseki said: “I want assure all of you here that our government will continue to support you.”

His deputy, who spoke in Pidgin English, further assured them that the Governor’s promises of a new hostel and better facilities would be fulfilled.

The coordinator of the camp, Pastor Solomon Folorunsho, while briefing newsmen, could not withhold his excitement.

He said: “You can see the children are very happy, today they don’t remember their pain or whatever happened to them.  Some of them are telling me that even before Boko Haram they had never experienced this before.”

He, however, stated that they have a lot of needs and called for assistance: “We are really in need of so many things; food, health, education, books, text books more especially and accommodation”.

The Governor also added to his plea for assistance.

“Programmes like this cannot be fully sustained by government alone. So the purpose of me coming here is to draw attention to camps like this and to see how we can attract resources beyond us as government have and to support this camp.

“So I really will like to use this opportunity to say that while we are all spending this Christmas with our family and loved ones, know that there are people out here as internally displaced people in Nigeria who need your love who need your help, who need your support.”

VIDEO: I Will Show You That I Am Edo State Governor, Obaseki Warns Oshiomhole