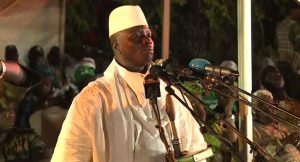 West African leaders will take a “major decision” on the political impasse in Gambia at a meeting in Ghana on Saturday, a spokesman for the Nigerian presidency said on Friday.

The West African ECOWAS bloc said last month it would take all necessary steps to uphold the result of a December 1 election in Gambia, where veteran President Yahya Jammeh says he will not step down after losing to Adama Barrow.

Reuters reports that ECOWAS has placed standby forces on alert in case Jammeh attempts to stay in power after his mandate ends on January 19.

Jammeh has called the bloc’s stance “a declaration of war”, and said he will defend himself.

“A major decision on the impasse is expected to be taken at that all-important meeting,” said Garba Shehu, spokesman for Nigeria’s President Muhammadu Buhari.

“President Buhari is the chief mediator of the crisis and he is committed to ensuring that the logjam is resolved,” he stated.

Jammed says ECOWAS has no right to interfere in Gambia’s internal affairs, and that Gambians should await the outcome of a legal challenge that his APRC party has lodged at the Supreme Court.

Why Senate Has Not Constituted Constitutional Review Committee – Lawan