How Maleek Berry Turned From Music Producer To Performing Artist 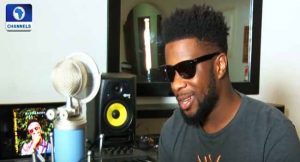 Maleek Soyebi, Popularly known as Maleek Berry, is a British born, Nigerian record producer, whose break into the Nigerian music circle
came in 2013 with his collaboration with Wizkid on the track ‘the matter’.

A graduate of computer sciences, Maleek’s early contact with music came from listening to classics from the likes of Michael Jackson.

Speaking of his early years in music, he told Channels Television that although he had always loved and practiced music, he took it a notch higher by creating a rap group in his local church.

This later inspired his introduction into music production.

“I started teaching myself how to produce and I was the one producing the music for the group, writing the hooks and that’s how I just fell in love with production”.

According to him, everyone in his family always knew he would go into music one day, although they insisted he must conclude his University education, before going ahead to pursue a music career.

Speaking of artists he has worked with, Maleek said he met with Davido in 2010 when the pop singer was still up and coming.

“That was the early stage of me attempting to make afro beats.”

Having worked with the likes of Wande Coal among others, Maleek’s brand has so far grown to become a household name in Nigerian music.

In 2016, he released an extended play body of work titled ‘the last days of summer’, clearly introducing himself as a performing artist.

The EP, puts together a couple of impressive singles including ‘Control and ‘Eko Maima’.

The 29 year old, however explained that when it comes to production, he still always knows how to take off his artist hat.

“When I’m a producer, I like to see myself as a servant. I take away the pride because it’s all about the artist and its all about helping the artist become a bigger star than they already are,” Maleek said.