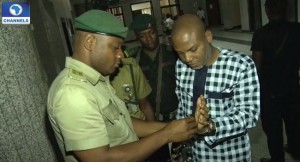 A court in Nigeria’s capital, Abuja, has barred reporters from covering the trial of the self-acclaimed leader of the Indigenous People of Biafra (IPOB), Nnamdi Kanu.

There is huge presence of security personnel at the trial of the pro-Biafra leader taking place at the Federal High Court, with the officials denying journalists and visitors entry.

Only close family members are allowed into the court by security operatives.

The trial Judge, Justice Binta Nyako, in December ruled that witnesses would be given some degree of protection.

The trial is presently being held behind a screen guard, as journalists can only hear the witnesses, lawyers and the trial judge but cannot see them.

Mr Kanu and three others, David Nwawuisi, Benjamin Madubugwu and Chidiebere Onwudiwe are standing trial on a three-count charge of criminal conspiracy, intimidation and belonging to an unlawful society.

They have pleaded not guilty to the charges.

He was arrested in Lagos on 14 October, 2015 and has been held in prison since then despite various court orders that ruled for his release.

Members of the IPOB in the southeast have also held series of protests, demanding his release.