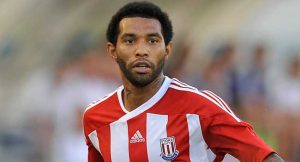 Former Stoke City winger, Jermaine Pennant, on Thursday put pen to paper on a contract that will see him wear a Bury shirt for the remainder of the current season.

The Shakers, who confirmed the deal on their website, described the former Arsenal player as one “with Premier League, Europa League and Champions League experience, (and) who has commanded transfer fees of over £10 million”.

The 33-year-old began his career with Notts County in 1998 where he quickly progressed to earn a £2 million move to Arsenal in the January 1999 transfer window.

After five years at the Emirates, where he was loaned out to clubs such as Watford, Leeds and Birmingham City, he was eventually signed by Liverpool for a fee that was reported to be £6.7 million.

At Anfield, Jermaine also had time with Portsmouth on loan, before leaving to join Spanish side Real Zaragoza.

Following a two-year spell in Spain, he returned to join Stoke City with another £2 million fee being paid for his services.

Jermaine also spent time with Wigan and Wolves before heading abroad to play in India and Singapore.

He recently returned to the UK, training with Bury for a number of weeks before being offered, and accepting a short-term deal with the club.

During his career, Jermaine has made over 360 appearances, scoring 22 goals.

Jermaine will take squad number 38 while with Bury, as they wait on International Clearance before he can wear his first Shakers shirt.