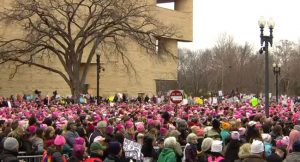 Thousands of women protesters on Saturday gathered in cities across the world to demonstrate against what they described as ‘threats to womanhood’ by newly sworn in U.S. President, Donald Trump.

In Washington, protesters assembled at the National Mall, as many as 500,000, to promote women’s rights, in an anti-Trump gathering that threatens to turn into one of the largest marches in U.S. history.

Although it was not pushed as a movement against the new president, most of the causes represented are those deemed under threat from Trump’s administration, including plans to repeal the 2010 Affordable Care Act, which among other things requires health insurers to cover birth control.

Hundreds of thousands of people marched in 161 cities across all seven continents, with focuses extended beyond Trump.

The Guardian reports that in the UK, between 80,000 and 100,000 people joined the Women’s March on London, and another 14 marches took place in towns and cities including Manchester, Cardiff, Edinburgh, Liverpool, Leeds and Belfast.

The London march began at the US embassy at noon, and finished with a rally in Trafalgar Square. Protesters waved banners inscribed: “Special relationship, just say no” and “Nasty women unite”. They were joined by the London mayor, Sadiq Khan, and Labour MPs including Stella Creasy, Harriet Harman and Yvette Cooper.

Protests also held in Norway and other cities in Europe.

Meanwhile, a traditional post inauguration interfaith prayer service has been held in honour of Donald Trump and his family at the Washington National Cathedral.

President Trump has also signed an executive order that targets the signature health care reforms of his predecessor.

US Accuses China Of Using Floyd Death For Propaganda