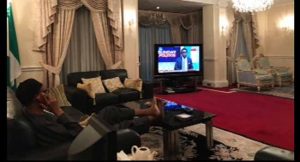 Nigeria’s President, Muhammadu Buhari, has again given an endorsement to Channels Television, as his favourite.

This is the second time the President will be giving such an endorsement on Channels TV.

The first was in a goodwill message to the station on its 21st anniversary.

The President’s picture was posted in a tweet, as he was watching Sunday Politics on Channels Television in London.

The photograph of the President, was apparently released to douse rumours that he was ill in London.

He said: “Wherever I am, I keep up with news from home. Channels TV is one of my favorites. I’m proud of what the Nigerian media are achieving.”

A guest on Sunday Politics was President Buhari’s spokesman, Femi Adesina, who debunked the rumours that President Buhari has been ill and wondered why critics altered the sequence of the statement issued regarding the President’s trip to the UK in order to make the President appear ill.

Responding to questions about the President’s health and the rumour, Mr Adesina said: “Don’t forget, the statement we issued said he was going on holiday and during that holiday he would do medical checkups. The sequence is very important – holiday first, medical checkups second.

“Nigerians want to turn the sequence to medical checkups instead of holiday first”.

His explanation, however, triggered questions regarding the President’s trust in the quality of medical services in Nigeria but he argued that it is usually important to consult doctors who have the patient’s medical history.

“Before he became President, he has been using those same set of people. So, it stands to reason that the same people continue to attend to him,” he explained.

The issue of the nation’s economy was also discussed, with the President’s spokesman further assured Nigerians that the end of the country’s economic challenge was nearer than ever.

Mr Adesina had told Seun Okinbaloye during the programme that all efforts of the Buhari administration to get Nigeria and Nigerians back on their feet would begin to materialise before the end of 2017.

He added that projections by notable international agencies have also predicted that Nigeria would exit recession in 2017.

Adesina refused to have the Buhari administration blamed for the recession that hit the country in the second quarter of 2015, saying Nigeria had been ‘primed for recession’ at the time Buhari became President.

“That recession was inevitable (with) the way Nigeria had been run two to four years prior the time we went into recession. There was no way it would not have happened,” he said.

He explained that President Buhari remained committed to correcting the mistakes of the past.

“What he is doing is good governance which will translate to better life for the people. It’s not going to be by a sudden flight, it’s not a magic wand that he will wave – policies that will yield over time and lead to improvements in the life of the people,” he said.

There have been questions regarding the current makeup of the President’s cabinet, with many wondering if there would be a rejig of ministerial appointments.

The death of the Kogi state-born former Minister of State for Labour, James Ocholi, and the impending exit of the Minister of Environment, Amina Mohammed for her UN appointment have also fuelled the speculation that there could be a rejig.

However, Mr Adesina insisted that it remained the prerogative of the President to rejig his cabinet.

While admitting that citizens have the rights to criticize the cabinet in the face of economic challenges, he maintained that the President has the final say on who works with him.

He gave the assurance that President Buhari is in touch with the grassroots and understands the challenges Nigerians have been going through.