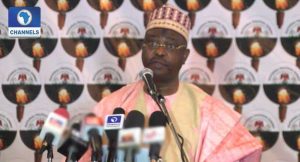 A former Speaker of the House of Representatives, Ghali Na’abba has appealed to politicians to embrace dialogue in order to reduce the increasing cases of political violence in the country.

Addressing participants at the 2017 National Political Summit in Abuja, where Nigerian democracy, constitutionalism and leadership recruitment paradigm was the focus.

Na’abba condemned the political development in Edo and Ondo governorship elections and the parliamentary rerun elections in Rivers state, and criticized politicians who go to the polls as if they were at war.

The former speaker said that Nigeria as a nation was founded on dialogue and asked the political class to consolidate on the gains of the nation’s founding fathers.

He said: “With the recent happenings in our political development especially the governorship election in Edo and Ondo and the legislative elections in Rivers state, can we say we are indeed making progress? It seems to me that people still contest elections as if it is a war that must be won or we perish.”

Na’abba was speaking in his capacity as the acting chairman of the governing council, Save Democracy Group Africa.

The chairman of the summit and former governor of Edo state, Oserheimen Osunbor, called for the enthronement of the rule of law.

The convener of the summit and Director General of Save Democracy Group Africa, Dr. Ifedi Okwenna, enumerated the essence of the national political summit.

It is to develop elite consensus on political and governance issues and promote tolerance to alternative view points and dialogue among stakeholders.

The three-day summit is expected to among other issues examine constitutional development options for sustainable democracy in Nigeria, political leadership recruitment and internal democracies in political parties.