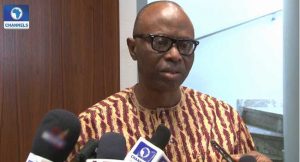 Ondo State Governor, Dr. Olusegun Mimiko, has commissioned the Public Service Training Institute which would serve as a breeding ground for public servants in the state and beyond.

The institute is located in Ilaramokin in Ifedore Local Government Area in the central senatorial district of the southwest Nigerian state.

It was envisioned in 2011 as part of the Governor Mimiko-led administration’s commitment towards ensuring efficient and effective service in the state’s public sector.

In his address at the event, the Governor said that he admitted that the feats recorded by his administration in key sectors such as health, education and urban renewal would not have been possible but for the dedication of the public service.

He expressed hope that the institute would be able to deliver generalised and customised training for the public service in the state as well as interested organisation or individual.

The guest speaker at the occasion, who is an Afenifere Chieftain, Mr Sehinde Arogbofa, commended Governor Mimiko for the establishment of the institute.

He expressed hope that humanity would benefit from the gesture, stressing the importance of education and productivity in any venture.

The commissioning was witnessed by dignitaries such as a former Secretary to the Government of the Federation, Mr Olu Falae; a former Deputy Governor of Osun State, Senator Iyiola Omisore and a former Permanent Secretary at the Federal Ministry of Health, Mr Dere Awosika, among others.

The edifice has a number of facilities which include: an administrative block, a 300 capacity conference hall, a 100 capacity boardroom and a standard restaurant.

Others include five standard lecture theatres, 10 syndicate rooms and library facilities among others.

Osun Election: How We Secured A Deal With SDP, Omisore – Oshiomhole

Obasanjo’s Tenure As Nigeria’s President Was A Calamity – Adebanjo