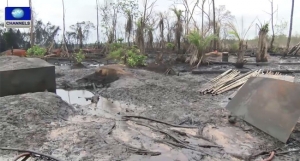 High Court sitting in the United Kingdom has ruled that oil major Royal Dutch Shell cannot be sued in London courts over allegations of oil spill in Nigeria.

Bille and Ogale communities in the oil-rich Niger Delta region had filed a case alleging oil spill against the company’s subsidiary, Shell Petroleum Development Company of Nigeria (SPDC) in the British court.

But the court on Thursday ruled that the suit did not establish that Shell, the parent company, had legal responsibility for SPDC’s actions and that the claimants failed to demonstrate the first threshold requirement – that is a ‘real issue’ between the claimant and the anchor defendants – is met.

Observers say that if the High Court had ruled in favour of the two communities, other claimants against British-based multinationals could have been emboldened to pursue legal action through the British courts.

Shell also denies responsibility for the spills, which it says were due to sabotage and illegal refining.

In the meantime, Leigh Day, a law firm representing the villagers, said it would appeal the ruling.

The SPDC’s General Manager for external relations, Igo Weli, said the firm hoped “the strong message sent by the English court on Thursday will ensure that any future claims by Nigerian communities concerning operations conducted in Nigeria will be heard in the proper local courts”.