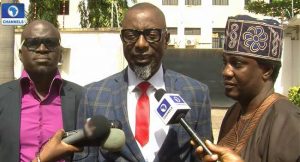 Following alleged looting of 40 billion Naira from the coffers of Ekiti State during his reign, the Ekiti state House of Assembly, has issued the Economic and Financial Crimes Commission (EFCC), a 21-day ultimatum to investigate former Governor and now Minister of Solid Minerals, Dr Kayode Fayemi and others.

Accusing the anti-graft agency of compromise, the House of Assembly threatened to institute a legal action against EFCC should it fail to comply with the directive.

The House, in a letter reminding the EFCC of the petition it submitted to the commission on October 27, 2016, said: “Should the EFCC fail, refuse and or neglect to act on this petition within 21 days of receipt of this letter of reminder; we shall have no option than to institute legal action against you”.

The letter of reminder, also signed by the Speaker and submitted by the Deputy Speaker, Hon Segun Adewumi and Chairman of the House Committee on Information, Dr Samuel Omotoso, on Monday reads: “We write to remind you of our petition dated 24th October 2016, which was submitted and duly received in your office on 27th October 2016.

“However, should you fail, refuse and or neglect to act on this petition within 21 days of receipt of this letter of reminder; we shall have no option than to institute legal action against you.”

Speaking to journalists after submitting the reminder, Dr Omotoso, who was flanked by Hon Adewumi, said that the APC led federal government was fighting corruption involving opposition with “sulphuric acid while using cold water to fight the ones involving APC members and functionaries of the federal government”.

The petition, dated October 24, 2016 and signed by Speaker of the House of Assembly, Pastor Kolawole Oluwawole, was submitted to the EFCC in Abuja on Monday, by the trio of the Deputy Speaker, Hon Segun Adewumi, Chairman House Committee on Information, Dr Samuel Omotoso and Hon Sina Animasaun.