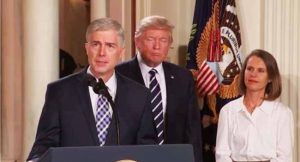 If confirmed by the Senate, the 49-year-old would replace the vacancy left on the court by the late Justice, Antonin Scalia.

While Senate Minority Leader, Chuck Schumer, says he has “very serious doubts” about the nominee, Trump on the other hand feels Gorsuch has a “superb intellect, an unparalleled legal education, and a commitment to interpreting the Constitution according to text”.

During the election campaign, the President also revealed that his nominee had been picked from a shortlist of 21 choices.

The court has the last legal word on many of the most sensitive U.S issues, from abortion to gender to gun control.