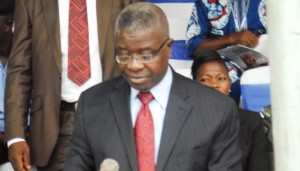 The Economic and Financial Crimes Commission (EFCC) has invited the immediate past Vice Chancellor of the Obafemi Awolowo University (OAU), Professor Bamitale Omole.

Professor Omole was invited by the anti-graft agency on Thursday to respond to the allegations of fraud and other financial crimes levelled against him.

The invitation follows a petition written to the commission by a group known as the Third Eye Transparency International, OAU chapter.

The EFCC, in a letter with reference number “CR: 3000/EFCC/IB/CTGI-PENSION/031/Vol1/140”, which was dated January 19, 2017 and signed by the Head of the EFCC in Ibadan, Akaninyene Ezima, invited the former Vice Chancellor to report at the Ibadan office of the commission for an interview.

The agency also asked the OAU Bursar, Mrs Aderonke Akeredolu, to report with Professor Omole to clarify issues on allegations of fraud and abuse of office allegedly perpetrated by the duo.

Confirming the invitation, the EFCC spokesman, Abiodun Olanrewaju, explained that the invitation was not a conviction of any sort.

He said that anyone could be invited by the anti-graft agency to shed light on any issues perceived as allegations levelled against him or her.

Mr Olanrewaju maintained that the allegation has nothing to do with the management of the institution but the petitioner.

‎The former Vice Chancellor was accused of renovating the VC’s residence with 208 million Naira and an illegal transfer of 34,905,690.17 naira from the OAU Minor Capital Account to the MBA Executive Fund Deposit Account ‘under questionable circumstances’.

He was also accused alongside Mrs Akeredolu of illegal deduction of contributory pension from salaries of workers running into billions of naira as the funds were said to have remained unaccounted for.