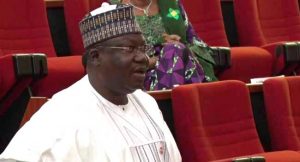 The majority leader in Nigeria’s Senate, Mr Ahmed Lawan, says the 2017 budget will address most of the economic challenges bedeviling the country.

Answering questions from journalists in Damaturu, Yobe state, the lawmaker who represents Yobe North at the upper chamber of the National Assembly, said that the 2017 budget contains lots of provisions that will improve the lives of ordinary Nigerians.

“Let me tell you that bad economy is one of the development challenges we face as a developing nation and I can assure you that the 2017 budget was well planned to address some of these problems we face as a nation.

“The budget makes the economy better because so many provisions, suggestions and estimates that will make life better for ordinary Nigerians were reflected in it to bring relief to Nigerians,” the Majority Leader said.

Senator Ahmed Lawan also has cheering news for disadvantaged citizens, saying they are also well taken care of in the budget.

“I want to assure Nigerians that some social interventions are enclosed therein for those who are so disadvantaged, so that the most vulnerable in the society access some funds for agricultural purposes and employment opportunities for our teaming youths.”

Dr. Ahmed Lawan said that the Senate has no option to act differently than to support the President to actualise his transformation agenda.

“There is nothing the Senate will do differently than to make life better for the people.

“The Senate will ordinarily key into this laudable programme aimed at making life more meaningful for the people,” he stressed.

The lawmaker said that this can be done either by legislation or simply by enlightening Nigerians on the benefits of such policy which needs the support of all and sundry.

On his recent emergence as the majority leader of the Senate, the Senator said his appointment in that capacity “was the initial position of the party and it is done now to uphold the party supremacy as earlier agreed by the APC caucus”.

The appointment according to him would stabilize the party more and unify the APC caucus since that was their initial plan.

“This development will help us face real development challenges better and minority parties will have more focus and will work better, thereby making a more productive Senate.”

He described his appointment in that capacity as “an act of God” and will continue to work for the progress and development of the country.

While calling for the support of legislative arms to accord Mr. President the needed support in actualizing his dreams for the country, Dr Ahmed Lawan said that the act of legislation is very key and central in any administration.

He thanked his colleagues for the trust they have in him and promised to do the job to the best of his abilities.

Dr. Ahmed Ibrahim Lawan takes over the position of the majority leader of the Senate from Senator Ali Ndume who represents Borno South at the upper chamber of the National Assembly.

Boko Haram Insurgency: We Lost Over 847 Soldiers From 2013 To Date, Says Ndume