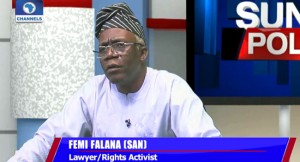 A senior lawyer and rights activist, Mr Femi Falana, has advised the Presidency to do more in telling Nigerians about President Buhari’s health status as it did in 2016.

Mr Falana said on Channels TV’s Sunday Politics that Nigerians need to know the state of the President’s health.

Although he admitted that the law does not mandate the President to disclose his health status, he argued that citizens should not be left speculating about their president’s condition.

“Under the Freedom of Information Act, the right to health is supposed to be shrouded in secrecy but I am saying now that henceforth, this situation calls for a review of the law so that we won’t be left guessing next time.

“We are talking of the President. Many state governors go in and out of the country, some for a month or two, some for three months without anybody asking any question and without any handover to their deputies.

“But I am saying that with what we are going through now, we must come to appreciate that if you are going into public office, you have no secrecy,” he said.

He said that since the Presidency started on a good note by informing the nation of the treatment of an ear infection last time, more information this time around would remove speculations and erase any form of rumour.

“It is our duty and right and the President took cognizance of that last year when he disclosed to Nigerians what he was going abroad for. This year should not be an exception.

“This is what has given room to a lot of rumours and speculation which are totally uncalled for,” he said.