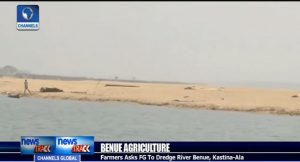 Farmers participating in the 2017 dry season farming in Benue state, are appealing to the Federal Government to dredge the River Benue and Katsina, to enable them increase access to water and cultivate the 2000 hecters farm land.

The farmers made the appeal at the official flag off ceremony by governor Samuel Ortom at the Agasha Fadama III Coastal Land on the Banks of River Benue, which is fast drying up.

Hon. Abraham, while explaining the production capacity of the land said, without access to water resources, cultivation of the 2000 hecters will constitute a challenge to increase food production target nationwide.

“A substantial portion of the River Benue has dried up, leaving a shallow dept of flowing water in one of Nigerians’ major rivers.

“The effect of global warming and climate change, is become clear by the day, with the abundant sharp sand taking over large portion of the big River Benue.

“The implication on dry season farming, a long standing tradition in Benue state, is a threat to increase food production nationwide and curb food crisis across the country”.

Meanwhile, Governor Samuel Ortom while promising to help in local irrigation project says, the dredging work is beyond the state government’s capacity.