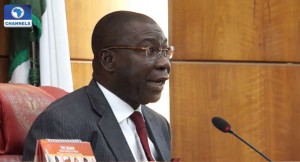 The Deputy Senate President, Ike Ekweremadu has appealed to members of the Peoples Democratic Party (PDP) not to be anxious over the appeal court ruling, favouring the Ali Modu Sheriff faction of the party.

Senator Ekweremadu, says there is no cause for alarm as the party leadership will meet as soon as possible, to take a decision on the best way forward.

He said the PDP will emerge stronger from its present challenges.

On Friday, a Federal High Court sitting in Port Harcourt ruled that the caretaker committee headed by Senator Ahmed Makarfi is illegal and cannot act on behalf of the Peoples Democratic Party (PDP).

The judgement, read by two of the three judges on the appeal panel, set aside the judgement by the High court in favour of Ali Modu Sheriff.

The lead Judge, B. A. Sanga, in his judgement said that due process was not followed in the decision by the PDP convention to dissolve the Ali- modu sherrif’s led chairmanship and hence should be disregarded.

Meanwhile a dissenting judgement was given by a third judge, Theresa Orji-Abadua, who upheld the decision of the trial court in favour of the Ahmed Markarfi leadership of the party

The Ali-Modu Sheriff faction, was dissolved by some leaders of the party at a national convention held in Port Harcourt in 2016.

It was the outcome of the convention that led to the intense legal battle.

The party has been thrown into series of court cases in several courts in the country raising concerns over the possibility of two factions.

Friday’s judgement may however, be putting a temporary rest to the crisis rocking the party until a redress is sought in the highest court.