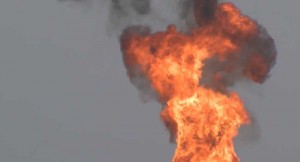 Two children have died in a fire disaster that broke out in an Internally Displaced Persons camp in Jere local government of Borno state.

The ill-fated camp, located in an area called Khurso Bashir, is only few kilometers to Maiduguri and is one of the unofficial settlements for displaced persons in the host community.

Witnesses say the fire, which reportedly started on Friday afternoon, spread fast as a result of the dried stalks used in erecting the tents.

At least 400 families reportedly lost their homes to the fire before men of the State Fire Service arrived the scene to prevent further spread.

Sources at the State Emergency Management Agency (SEMA), said some of the IDPs are from Marte and Mafa areas of the state, while others are migrants from smaller villages and the state capital.

Survivors of the misfortune have blamed the incident on one of their fellow IDPs who was said to have been roasting groundnuts when the fierce wind blew embers from the fire she lit to the thatched shelters.

Unfortunately, the deceased children, caught up in the fire could not be rescued until they died.