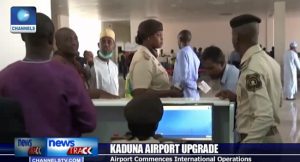 All flights are now headed to the Kaduna airport which will serve as the alternative for the next six weeks.

Our Aviation correspondent, who has been monitoring the situation in Kaduna reports that the first day of operations at the facility has been with mixed feelings.

On Wednesday, passengers queued to obtain their tickets and process their traveling documents at the check in counter inside the new terminal building.

The police, Customs and Immigration officials were also on ground to provide the necessary security checks to ensure safety of passengers and their luggage.

While many of the foreign airlines have indicated that they are not ready to operate to Kaduna because of huge logistics, Ethiopian Airline has landed at the airport to resume international flight operations.

At exactly 11:30 am on Wednesday, the Ethiopian Airline opened landing operations at the International Wing of the airport in the admiration of passengers and aviation workers.

The arrival of the international carrier signals the commencement of both domestic and international flight operations at Kaduna airport.

Security has equally been beefed up at the airport and its environs.

The Deputy Inspector General of Police in charge of operations, Joshak Habila was on ground to monitor the exercise.

Meanwhile, the Federal Road Safety Corps has designated three out posts along the Kaduna -Abuja highway and near the airport for emergency situation.

While, the Federal Airports Authority of Nigeria (FAAN), says it had licensed over 200 taxis and buses to operate shuttle services from the Kaduna International Airport beginning from Wednesday.

Some passengers who arrived the Airport from Abuja to board their flight outside the country say the ordeal of getting through the terminal building of the airport and process their papers is better imagined than experienced.

But, there are also those who were satisfied with the level of facilities and services at the airport .

Reacting to the complains made by some passengers, the Managing Director of Federal Airport Authority of Nigeria(FAAN) Saleh Dunoma , says there is no cause for alarm as all teething challenges that will hamper smooth operations will be addressed today.

He assured that FAAN and other relevant agencies will intervene in the current sad experience at the airport and create an environment that gives passengers respect and dignity while they use the airport.

However, the Acting President, Professor Yemi Osinbajo is expected in Sokoto state enroute the Kaduna airport.