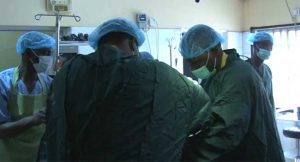 The Association of Public Health Physicians of Nigeria has raised an alarm over increasing rate of Non-Communicable Diseases like diabetes, cancer and hypertension in the country.

Speaking at the opening, the Chairman, Local Organising Committee, Dr. Olusegun Elegbede, blamed this on change in lifestyle of people and the economic recession.

“There has been growing burden of NCD and the World Economic Forum has reported it as leading macro-economic risk at global level,” he said.

The National Chairman of APHPN, Professor T.M. Akande, said the conference offered another opportunity to network and rub minds on burning public health issues in Nigeria and the strategies for advancing public health practice in Nigeria.

“In addition, changes in lifestyles and in the environment have increased the morbidity and mortality rates due to NCDs,” he said.

Recommending solutions, Alausa called for the strengthening of health systems with appropriate technologies in tertiary institutions.

According to him, the cost of management must be made affordable and heavily subsidised by the government and other health agencies.

“Affected people with diagnosed NCDs should seek hospital patronage early and desist from consulting and seeking for traditional and religious solutions in the first instance.

“The government should come to the assistance of patients, rather than the patients begging for donations on television stations and social media,” he added.

Cancer To Rise By 81 Percent In Poor Countries – WHO