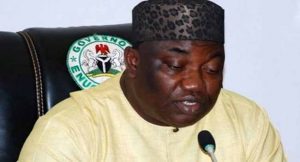 Enugu State Governor, Ifeanyi Ugwuanyi, has called on the newly sworn in judges in the state to uphold the law and be objective in discharging the duties and responsibilities of their office.

He congratulated the chief judges whom he described their appointment as most deserving, as he urged them to discharge their duties in honesty.

“I urge you to diligently carry out the duties and responsibilities of your office which entail the dispensation of justice,” the governor said.

In an earlier remark, the Chief Justice of Enugu State, Justice Priscilla Emeghelu, told the Governor that a lot of vacuum have been created, especially in the State High Court as a result of retirement and death of some judges.

“We must not fail to observe that this number is grossly inadequate, particularly as it affects the High Court whose number of judges have been depleted by retirement and death of its members in the past 10 to 11 years,” she said.

Justice Emeghelu added that the death of judges has become a burden on the available ones.

“This has led to honourable judges sitting in two judicial divisions and cases filled each day have continued to increase.

“We are hopeful that Enugu Judiciary will get up to five to six slots in the next exercise,” she stated.

Expressing their appreciations, the new chief judges promised to carry out their duties without bias or sentiments.