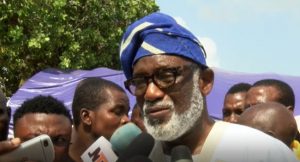 The Ondo State Governor, Rotimi Akeredolu, has approved the appointment of Honourable Ifedayo Abegunde as the Secretary to the State Government, and Mr Olugbenga Ale as the Chief of Staff to the Governor.

The approval was disclosed in a statement issued on Monday from the office of the Chief Press Secretary to the Governor.

According to the statement, Governor Akeredolu approved the appointment of seven others which he said takes immediate effect.

Mr Jones Ogunmusire was appointed the Senior Special Assistant (SSA) to the Governor on Administration and Policy Planning, Honourable Taofeek Olawale Abdusalam as the SSA on Legislative Matters, and Mr Kunle Adebayo as SSA on Research and Documentation.

Akeredolu’s Wife Calls On Igbos In Ondo To Be United