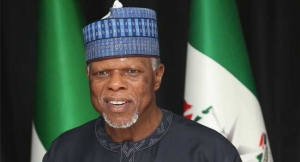 The Senate has refused to engage with the Comptroller General of Customs Rtd Colonel Hameed Ali, because of his failure to wear the Customs uniform as directed by lawmakers.

The Senate has asked him to reappear before it next week Wednesday in uniform.

The Customs CG Retired Colonel Hameed Ali defied the Senate and appeared before lawmakers attired in a white caftan and cap, contrary to the directive of the Senate that he appears in Customs uniform.

But Deputy Senate President Ike Ekweremadu who is presiding over plenary asked the Customs CG why he did not appear in uniform of which he responded that there is no law that compels him to wear a uniform.

The Nigerian Senate had earlier ordered the Customs Comptroller General to appear before its Committee on Customs  in the appropriate uniform.

This follows the uproar that greeted the Customs Service’s new directive on duties to be paid on imported vehicles which is yet to be abated.

While Nigerians have expressed concerns on the issue, their representatives in the Senate are livid over the insistence of the Nigerian Customs Service to go ahead with the policy.

The Senate had earlier in a resolution, asked the Comptroller General to shelve the plan until he appeared before its committee, they however, now want him to appear in uniform.

He is advising the Senate to also avail itself of the legal basis on its decision to compel him to wear the uniform.

However the new letter has angered lawmakers who are accusing the Customs CG of disrespecting the Senate.