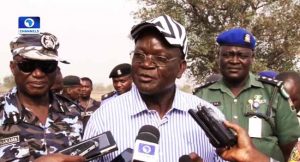 The Benue State Governor, Samuel Ortom, has asked the people of Zaki Biam to remain calm, as everything will be done to bring the killers of some traders in the town to justice.

The Governor made the call on Tuesday when he visited the town, alongside the Commissioner of Police in the state, Bashir Makama, to assess the situation there.

The Police confirmed that 17 persons were killed in the attack, after gunmen riding on motorcycles invaded the area while shooting sporadically.

The attack on the traders took place on Monday evening at a yam market in Zaki Biam in Ukum Local Government Area of Benue State, north-central Nigeria.

The Special Adviser to Governor Ortom on ICT and Media, Tahav Agerzua, clarified that the killing was not linked to the activities of herdsmen.

Although witnesses claim that about 27 people were killed by the attackers, but one of the survivors alleges that many lives were lost.

President Muhammadu Buhari in a statement issued on Tuesday by his spokesman, Mr Femi Adesina, condoled with the government and people of Benue State on the attack.

“The President condemns the wicked attack and directs security agencies to begin immediate investigation with a view to bring the perpetrators of the act to book,” he said

President Buhari also sympathised with those who lost their loved ones and prayed that God comforts them.