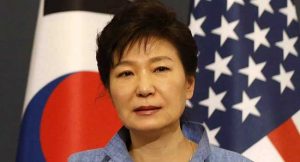 South Korea’s ousted President, Park Geun-Hye, has been questioned for 14 hours over a corruption scandal.

The 65-year-old has been allegedly
colluding with close friend Choi Soon-Il, to coerce tens of millions of U.S. dollars out of big Korean companies like Samsung.

Choi Soon-Il is currently in Police detention and on trial, so is heir apparent of Samsung, Lee Jae Yong.

Just before she entered the prosecutor’s office, Ms Park apologised to the people and promised to cooperate with questioning.

She, however, did not exercise her right to remain silent during the marathon questioning session which lasted into the night.

According to reports, the prosecutors would have to determine based on their investigation and Ms Park’s statements, whether or not to issue a warrant for her arrest.