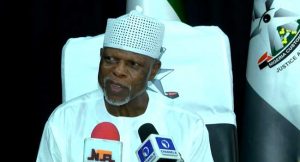 The Nigerian Senate has called for the resignation of the Comptroller General of the Nigeria Customs Service, Colonel Hameed Ali (rtd), saying he is unfit to hold any public office.

The Senate made this declaration after the Customs CG failed to appear before the Senate on Wednesday.

The clerk of the Senate read a letter from the Attorney General of the Federation (AGF), advising the Senate to step down the matter of the invitation of the Customs CG, as the matter is in court and deliberating on it would be subjudice.

The letter elicited strong reactions from lawmakers who accused the AGF of incompetence and flaming division between the National Assembly and the Presidency.

The Senate is also asking the Customs CG to cancel the retrospective policy on duties for vehicles.

The Customs CG had earlier said that he will not appear before the Senate until court ruling.

The development, followed a suit filed by an Abuja based lawyer, Mohammed Ibrahim, seeking a perpetual injunction restraining the National Assembly from compelling the CG to wear uniform in performance of his duties.

Mr Ali, who acknowledged receipt of the court summons, told a news conference that the Attorney General who is a co-defendant in the suit, has written to the National Assembly advising lawmakers to maintain the status quo, pending the outcome of the suit.

“Based on the summons before the court, all matters relating to the issue are now subjudice so status quo is “anti” which means I will not appear until the court makes a pronouncement therefore the situation remains as it is”.

The CG had been summoned to defend the payment of retroactive duties by motorists whose vehicles have no genuine import duties.

Although he eventually appeared before the Senate on March 16, he made good on his word of not appearing in his uniform.

The House, however, refused to engage him and fixed another date (March 22), for him to appear as required; failure to which the Senate leadership might be forced to issue an arrest warrant as initially threatened.

Meanwhile, more reactions have continued to trail the issue.