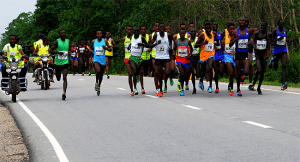 All is now set for the 5th edition of the Okpekpe Road Race which is scheduled for May 13, 2017 in Okpekpe, Etsako East local government area of Edo state.

Addressing journalists at the Government House in Benin City, the Edo state capital, a team from the organising committee led by Mike Itemuagbor, disclosed that the event has seen some upgrades including a mobile app for access to competition details and the use of transponders and trackers to eliminate cheats.

He disclosed further that the 10km Okpekpe Road Race which is a bronze category event of the International Association of Athletics Federation (IAAF), will make Edo state a tourist attraction.

He assured participants of improvements in the competition particularly the VIP race.

“We want to do an effective VIP race, especially those that would run for a cause,” the committee leader stated.

On his part, the Edo State Governor, Godwin Obaseki, lauded the organisers for the innovations in the 2017 edition.