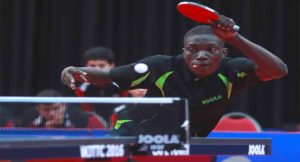 Africa’s Table Tennis power houses, Egypt and Nigeria as well as 10 others will compete for the four slots available for Africa in the 2018 Youth Olympic Games (YOG) taking place in Argentina.

In the seeding list released by ITTF Africa, Egypt’s duo of Youssef Abdel-Aziz and Marwa Alhodaby are top seeds in the boys and girls event respectively.

After missing out from the 2017 International Table Tennis Federation (ITTF) African Junior Championship, Nigeria’s Azeez Solanke and Tosin Esther Oribamise are the only new faces in Tunis and they are both seeded number two in the boys and girls events of the qualifiers.

All the round robin matches will be played on Sunday April 16 while the semifinal matches hold on Monday April 17 with the finalists in the boys and girls event qualifying automatically for the Youth Olympic Games.

Tunisia’s queen of the table, Garci Fadwa will represent the host alongside southpaw, Nathael Hamdoun.

Also another new faces in the qualifying tournament are Ethiopia’s duo of Kalab Bereba and Tamiru Feven Kinfu who also missed the ITTF African Junior Championship.