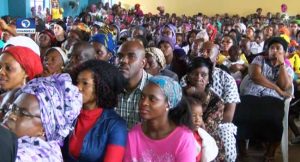 Christians have been advised to proclaim the resurrection of Jesus Christ from the dead, to signify the finished work of faith and eternal life through salvation.

The senior Pastor of Shelter of Glory Church, Makurdi, the Benue state capital, King Omudu, gave the charge during the Sunday Easter service.

Apostle Omudu recounted the efforts by those opposed to the church, to discredit the salvation offered to mankind through the death and resurrection of Jesus Christ.

“Only John was close a bit, he was close enough to see, everybody melted into the crowd, they stood afar and gave a distance, infact, it was the women that were even coming a bit close.

“This was their state on Friday, this was who they had become on Friday and then on Sunday morning, something happened, and something changed. The same people that were so afraid for their lives and did not want to associate with him, they turned around.

“The bold proclamation of the apostles and the eloquent silence of the Jews, is an evidence that he is alive. Look at how their lives so radically changed, before now, they were hiding from even little children but right now they will shout it from roof tops that Jesus is not dead but he is alive.

“If Jesus is alive, it means that everything he said he was to do for you, he did them all,” the clergyman noted.