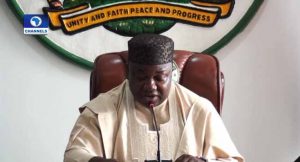 Enugu State Governor, Ifeanyi Ugwuanyi, has reiterated his resolve to transform Nsukka, a town and Local Government Area in South-East Nigeria, into an urban area.

He made this known during an event organised by the people of Nsukka town to thank him for the roads projects already completed in the area especially the Opi/Nsukka road.

He stated that he is fully committed to fulfilling his campaign promises and improving the living standards of people in the area and the state at large.

“We promised to pay a special attention to rural development and to create more urban areas to boost economic growth. In line with this, we pledge to equip and modernise Nsukka”

“We are gratified to see that the projects we have done in Nsukka such as construction of vital roads, installation of street lights, upgrading of health and other public facilities, among other things, have given this town a new look and lifted the quality of life for its residents. I want to assure you that we will remain committed to the full realization of our vision for the town”

One of the organisers, Mr Peter Odo, a permanent secretary at the government house, said prior to the construction, the road was considered a death trap especially during the rainy season. He added that it was the first time such development was coming to Nsukka

While commending the governor, he called for the need to focus more on human capacity building to foster economic growth.