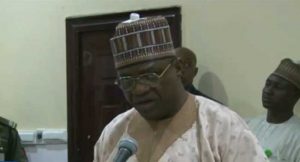 The Yobe State Government is partnering with the Office of the National Security Adviser (NSA) to tackle the menace of insurgency in North-East Nigeria.

Speaking at a meeting in the state, Governor Ibrahim Gaidam noted that securing the lives and property of the people was everyone’s business and called for effective collaboration in waging the war against terrorism.

He appealed to the Federal Government to step up efforts to fully rid the region of the Boko Haram terrorists, promising that his administration would continue to accord security issues the desired attention.

“I wish to make an appeal to the Federal Government through the Office of the National Security Adviser, to intensify the mopping up ofthe remnant of Boko Haram terrorists in all nooks and crannies of the North-East, in conjunction with the vigilante group and with the aid of the organised community policing and surveillance training,” the Governor said.

He stressed that the meeting would enable participants to exchange ideas and find a way out of the restiveness engulfing Yobe State and the North-East as a whole.

“A workshop of this nature will enable participants to exchange ideas and arrive at a far reaching resolution on security issues unique to our zone, and take appropriate steps to arrest the threat to lives and property.

“It will equally avail us the opportunity of realising the need for us all to work together collectively towards eliminating the menace of the men of the underworld and miscreants,” Governor Gaidam stated.

The NSA, Major General Babagana Monguno (rtd), whose address was read by the Head of the Counter-terrorism Office, Alhassan Useini, lauded the State Government’s effort in the rebuilding process and called for effective collaboration between security forces and the civil populace in tacking insecurity.

He emphasised the need for intelligence and information sharing as an effective way of tackling insurgency across the country.

“This State Workshop should be seen as a call to reawaken the collaborative action which we must all embrace, as victory by one is victory by all of us, and a greater victory for our entire nation and the world. Our motto therefore should be mutual interest, mutual gain and mutual respect,” he said.

The Secretary to the Yobe State Government, Baba Mallam-Wali, described the workshop as timely, saying it would address key issues in the fight against terrorism and work out ways in the rebuilding of the war devastated areas.

He praised the present administration in the state for its role in relocating the Internally Displaced Persons to their ancestral homes.

Kyari, Monguno Rift Confirms There Are Many Cabals In The Presidency – Afegbua