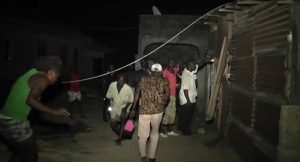 A group of women under the aegis of Mothers of Efik Kingdom have promised to rebuild the viewing centre in Calabar where disaster struck on Thursday.

Many football fans were electrocuted when a high-tension wire fell on the viewing centre while they watching the Europa League clash between Manchester United and Anderlecht.

The tragedy led to tributes from all over the world with Premier League giants Manchester United sending condolences to families of the victims.

On Saturday, the group led by Senator Florence Ita-Giwa visited the viewing centre in Nyasang Community to commiserate with the families of the deceased.

The women who laid a wreath at the viewing centre in memory of those that died, demanded a piece of land from the community for the construction of a new viewing centre.

Ita-Giwa told members of the community that the intention of the mothers was to build a modern viewing centre in memory of those that dies.

She said pictures of the football fans who lost their lives in the incident would be placed on the walls of the centre.

“As mothers, we are going to do our best to alleviate the suffering of people that lost loved ones,” she said.

Ita-Giwa called on football icons to support the project as a legacy for lovers of the game in the State.

The group promised to visit the University of Calabar Teaching Hospital where some of the Victims are currently undergoing treatment.

The Secretary of Nyasang Clan, Iso Bassey Edem, described the visit and attention the community was getting as a welcome development.