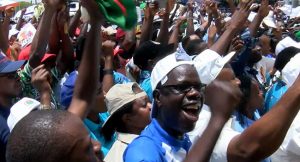 Thousands of workers in Yobe State converged on the Damaturu Township Stadium to observe the May Day celebration in grand style for the first time in five years.

The celebration witnessed a high turnout as a result of the relative peace being enjoyed across the state, as well as Nigeria’s North-East geopolitical zone.

Addressing the workers, Governor Ibrahim Gaidam, who was represented by his deputy, Abubakar Aliyu, appreciated their contributions in the development of the state.

He assured the civil servants that his administration would continue to evoke ways of improving their living conditions.

The governor promised them that the upward review of pensions, leave grants and other entitlements of the civil servants would be worked out by the Secretary to the State Government and the Head of Service for government consideration.

He also expressed appreciation to security agencies for their dedication towards the return of peace and urged the citizens to partner with the security operatives in sustaining the existing peace in the state.

The State Chairman of the Nigeria Labour Congress (NLC), Ibrahim Lawan, commended the State Government for the frequent payment of workers’ salaries.

He however, called for the review of pension allowances, leave grants and completion of the building of the Labour House currently under construction among others.

Some of the workers who spoke to Channels Television, Malama Fatima and Musa Buba, praised security operatives for the return of peace which they said was the reason they could celebrate Workers’ Day in Yobe State for the first time in five years.

They called on the State Government to consider all the recommendations put forward by the NLC Chairman, saying it would encourage their productivity.