Herdsmen: No Free Land For Grazing In Edo, Says Obaseki 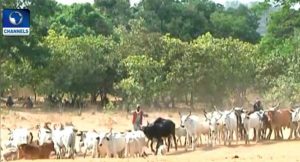 Governor Obaseki stated this during a courtesy visit on Tuesday by the State Chapter of the Christian Association of Nigeria (CAN) at the Government House in Benin City, the state capital.

He said cattle rearing is like other economic activities, adding that those who want to engage in the business must be ready to operate it just the way other private businesses are done in the state.

“As far as I’m concerned, grazing is an economic activity if they (the herdsmen) go to the local governments who feel they have the land, they have the water etc.

“In fact, anybody who wants to come and graze and pay, let them come so that they will do so,” the governor said.

He also described the debate over allocating lands as grazing sites for herdsmen in Edo State as a nonissue which should not bother the people.