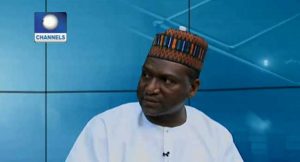 The Vice President of Dangote Group, Mr Sani Dangote, attributed this to the effect of the new Tomato Backward Integration Policy of the Nigerian Government.

He told Channels Television that the factory was set up to help farmers, while he decried the unhealthy state of tomatoes in the market.

“If you see how tomatoes are been put to dry on the roadside under the Sun, purely the common sense is for us to set up that industry,” Mr Dangote said.

He, however, expressed optimism that local farmers who had been short-changed under the country’s massive tomato imports would benefit from the factory.

“First, the population is increasing in the whole country; there’s lack of job, lack of financial capacity everyday.

“These farmers are working hard but all they need is for someone to obtain their produce and pay them a decent price, so that they can live better and have better income; and all these insecurity problems – lack of job and idleness – will be eliminated,” the Vice President of Dangote Group noted.

Dangote Has Always Stood To Be Counted, Buhari Congratulates Businessman At 63