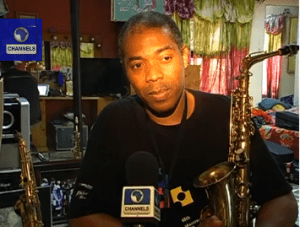 As Femi Kuti played a single note on his saxophone for 51 minutes and 35 seconds, his fans held their breath in excitement and disbelief.

This was the second attempt by the Nigerian artist, who took up music from his father, the legendary King of Afrobeat, Fela Kuti.

The realisation that he had fallen short of the record was heartbreaking for Femi’s fans. He says they convinced him to try again.

On Sunday at the Shrine, where his father Fela electrified music lovers with his hip-shaking and a strangely hypnotic blend of jazz, funk and West African folk rhythms, Femi went over 51 minutes.

Of the feeling, he says, “Very nice, satisfied, you feel complete because it seems like an impossible task…

“When I even tried I burst my lip. And Sunday was just around the corner, I knew my lip would not heal before Sunday so I was already very worried.”

Consequently, he said he informed his team and friends that it was an impossible feat, but they reminded him that he had already promised to take another shot at breaking the record.

They assured him that even if he failed to break it, he would still have their love.

Femi says he learnt the skill known as circular breathing – a technique where players breathe through their nose while pushing out air, from his father who taught it using a straw and water.

In a series of tweets sent from their Twitter account, Guinness World Records said they rested the category several years ago and that they no longer monitor longest wind instruments notes using the circular breathing technique.

Femi reassured his fans, saying his attempt was not to break the record but to enhance creativity.

He added that the feat was “to show the possibility” especially to young African boys and girls that there is no limit to achieving greatness even at his age.

Femi who says his father had warned him not to allow talent to get to his head because that was not the essence of music, plays at the Shrine every week to a packed house and like his father is also a dedicated activist with a cult following.

“The record came so late because everybody has been anticipating this record for the past three to five years and you can see that we are so happy and we are very very proud of Femi and we will support him to the end,” David Phillip, a resident of Lagos said.

Now that this is done, Femi says he is back to creating music.