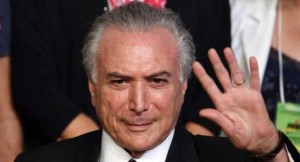 The President of the Brazilian Bar Association presented on Thursday documents seeking the impeachment of President Michel Temer who is implicated in a widening corruption scandal that is undermining his government’s fragile efforts to end a historic recession.

Brazilians were shocked by a recording disclosed last week that appeared to show Temer condoning the payment of hush money to a lawmaker jailed in a corruption probe that has ensnared dozens of politicians and executives in the last three years.

The OAB now joins the ranks of those filing impeachment motions against Temer in Congress, arguing that the recording, if proven to be accurate, showed a dereliction of presidential duties to uphold the law.

The association’s president, Claudio Lamachia, said the fact that Temer had not denied the content of the dialogues in question in two statements and a prominent newspaper interview showed the facts were indisputable.

The revelations have badly eroded political support for Temer’s measures to spur economic recovery, including overhauls to Brazil’s labour and social security regulations.

Temer on Saturday sought to reassure Brazilians with a fierce denial that he had condoned or committed any crimes, and accused Joesley Batista, chairman of meatpacking giant JBS SA, of manipulating the recorded conversation at the centre of the probe.

Few in Brazil appeared reassured, however, with one allied political party saying on Saturday that it would no longer support Temer’s conservative government and another saying it would consider doing the same, whilst scattered protests have taken place in the country’s main cities.