I Think We Are Getting Out Of Recession – Finance Minister 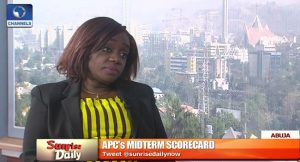 The Minister of Finance, Kemi Adeosun, has said she thinks Nigeria is getting out of recession and getting onto a path of growth that will be sustainable.

“I Think we are getting out of recession; all the statistics seem to suggest that but more importantly, we are getting on the path of growth that will be sustainable so we can see a future for Nigeria,” she said.

“So I think it is getting better.”

The Finance Minister, who was a guest on Channels Television’s breakfast show Sunrise Daily said that the Buhari administration inherited lots of issues from the previous administration and the economy needed to go through a radical surgery and fixes.

“We inherited a lot of problems, the Nigerian economy didn’t just need a little bit of fix here and there but needed radical surgery and to heal it will take a little bit longer”.

On the development of infrastructure, the minister stated that the Federal Government is looking at the long-term, which is why it seems like the growth of the economy is slow.

She regretted that one of the issues affecting the economy is unemployment. “We have people that have been unemployed for about 10 years and the economy and job market cannot absorb them.

“We have people that have been unemployed for about 10 years and the economy and job market cannot absorb them,” she said.

According to her, the solution to the high rate of unemployment is getting the economy productive; for businesses to open up, employ people, among other things.


For instance, she said the clothing industry can provide employment for tailors, manufactures, lawyer, accountants and others.

She insisted that jobs must be created for the unemployed.

The Minister blamed food price escalation on the high cost of transportation for taking farm produce from the rural areas to the urban locations.

She added that the government is proferring solutions to help reduce the cost of transportation by supporting the farmers through infrastructure.

Japan Slides Into Recession, Forecasts Of Worse To Come