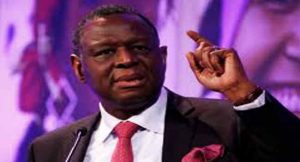 A former minister of health and the Executive Director of the United Nations Populations Fund, Babatunde Osotimehin, is dead.

The former health minister died in the early hours of Monday, Premium Times reported, citing sources close to him.

Born on February 6, 1949, Osotimehin attended Igbobi College from 1966 to 71 and proceeded from there to the University of Ibadan for his medical studies after which he received a doctorate in medicine from the University of Birmingham in 1979.

He was appointed the UNFPA Executive Director in November 2010 for a four-year term, which was renewed in 2014.

He was also until his death an Under-Secretary-General of the United Nations.

Prior to becoming the health minister, Osotimehim held various roles in health agencies in the country.