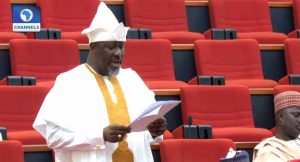 The people of the western senatorial district of Kogi State have kick-started the process of recalling Senator Dino Melaye from the National Assembly.

The exercise which took place across the seven local government that form the district indicated that the people were desirous of recalling him for poor representation at the Senate.

Some electorates who spoke to JOURNAL in Yagba west, Yagba east, Ijumu, Mopa/Moro and Kabba/Bunu local government said they have started collating signatures in various wards in the councils to remove Senator Dino Melaye from the National Assembly.

According to them, Senator Melaye has not deemed it fit to have a constituency office in Kogi West Senatorial Zone even after two years in the Senate, saying he has no presence in the district.

They also complained that the lawmaker has no projects initiated in the constituency after two years in the Senate, stressing that he could not bring home any dividends of democracy to the senatorial district.

The people, therefore, vowed to complete the recalling process to enable them elect someone who will represent them adequately in the Senate.