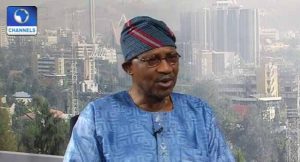 A member of the Presidential Advisory Committee Against Corruption, Femi Odekunle, has stated that lack of cooperation among the arms of government has contributed to weakening the Federal Government’s anti-corruption war.

He said this on Channels TV’s Sunrise Daily while addressing some issues including the recent victory of the Senate President Bukola Saraki at the Code of Conduct Tribunal (CCT).

“From what I know, the anti-corruption war is like fighting for the soul of Nigeria and the government was right that the flagship of his three-point agenda is fighting corruption but in a democracy where you want to fight corruption, you need the cooperation of the executive, legislature and the judiciary.

“At the end of the day, if you don’t have the cooperation of these three arms of government you are going to have a lot of problems which is what we are having.

“We don’t seem to have the cooperation of the legislature – Even among the executive, you find what we call blacklegs and even in the judiciary which is the hope of the country in a democracy for fighting corruption.

“If it was a military government it would be a different ballgame. But in a democracy you rely on the Judiciary so, regardless of the efforts of the investigators of the EFCC of the Police or ICPC, they must still end up in court and when the court now seems, as it is being manifested recently, not to be cooperating, then there is a problem.”

Explaining further about the “blacklegs” which he claimed were in the legislature, he noted that regardless of the bills that have been passed or not, the behavior of some members of the legislature have also contributed to slowing down the anti-corruption war.

“Do you know how many of them have cases in court and then you will reply to me that they are innocent until proven guilty – this is part of the hoax of the legal system we are running. So you have legislatures and you have a good number of them who actually have cases in court, Corruption,” he stressed.

“In a country where people are fighting together against corruption, it is very unusual to have about two, three, four of you, facing corruption charges in court.

“The fact that you have enough money to hire Senior Advocates of Nigeria, to hire lawyers to go to court and win the case, if not technically but corruptly, does not mean that you are cooperating with the anti-corruption fight.”

Odekunle, therefore, noted that a government that wants to fight corruption must realize the depth of the situation, citing examples like the U.S and the U.K which according to him had to reenact their laws when they realized that terrorism was becoming a serious problem.