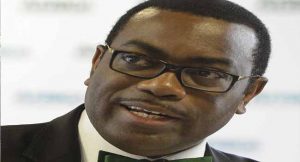 President of the African Development Bank, Dr Akinwumi Adesina, has been named the 2017 World Food Prize Laureate at a ceremony at the U.S. Department of Agriculture.

President of the Foundation, Kenneth Quinn, who presented the award, said Adesina won the prize “for driving change in African agriculture for over 25 years and improving food security for millions across the continent”.

Quinn added that he “grew up in poverty himself” and embarked on a journey to use his academic exposure to “lift up millions of people out of poverty, especially farmers in rural Africa”.

On his part, Adesina, 57, noted that Norman Borlaug who was an American agronomist, humanitarian and the founder of the prize, was a great mentor and inspiration to him.

In 1970, Borlaug was awarded the Nobel Peace Prize for his life’s work feeding the world through the scientific advancements of the Green Revolution.

Adesina, will receive the $250,000 award administered by the Des Moines-based World Food Prize Foundation at a ceremony at the state Capitol in October.

Present at the occasion were former Minister of Finance, Ngozi Okonjo-Iweala, and U.S. Secretary of Agriculture, Sonny Perdue, Congressmen, Ambassadors and members of the diplomatic corps.

Adesina was the Minister of Agriculture under the administration of former President Goodluck Jonathan.

He studied agricultural economics at the University of Ife in Nigeria, where he met his wife, Grace, whose father had served as agriculture minister under Nigerian President Olusegun Obasanjo.

Adesina went on to earn a master’s degree and a doctorate in agricultural economics at Purdue University in Indiana.