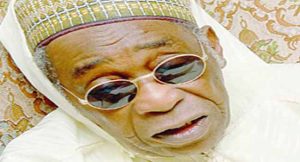 Reports say that he died in a hospital in Cairo, Egypt’s capital while receiving treatment for an illness.

According to officials of the Kano State Government, the Dan Masanin Kano as his popularly known  died at the age of 88.

The Commissioner for Information in the state, Mohammed Garba, says tomorrow Tuesday has been declared as a public Holiday for his burial, at the Emir’s palace by 4pm.

Maitama Sule before his death was a politician, acclaimed orator and diplomat.

In 1976, he became the Federal Commissioner of public complaints, a position that made him the nation’s pioneer ombudsman.
In early 1979, he was a presidential candidate of the National Party of Nigeria but lost to Shehu Shagari.

After, the re-election of President Shagari in 1983, Maitama Sule was made the Minister for National Guidance, a portfolio designed to assist the president in tackling corruption.

Son Of Egypt’s Morsi Dies Of Heart Attack At 25