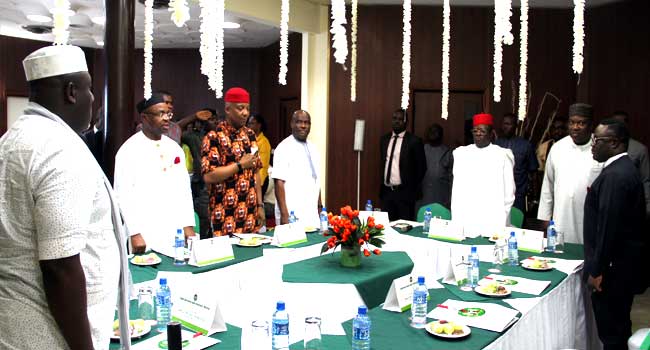 Governors of states in the South-South and South-East met on Saturday in Enugu.

The meeting had in attendance, the Governor of Ebonyi State, Dave Umahi; his counterpart from Enugu State, Ifeanyi Ugwuanyi, and the Governor of Rivers State, Nyesom Wike.

Also at the meeting is the Deputy Senate President, Ike Ekweremadu, and the President of the Ohanaeze Nd’igbo, John Nwodo.

Although the outcome of the meeting is still being expected, there are very strong indications that the meeting will continue its discussion on the restructuring of Nigeria, and the need for the practice of true federalism, which is what was discussed at their previous meeting, also in Enugu.

The Governor of Delta State, Ifeanyi Okowa, and his counterpart from Bayelsa, were, however, absent from the meeting.

Also absent was the Governor of Anambra State, Willie Obiano.

The host governor, Ifeanyi Ugwuanyi, in his opening remarks told the governors that there is the need for inter-regional cooperation saying it would help solve developmental issues accord the region.

Ugwuanyi also said that issues like road infrastructure and security will need inter-governmental synergy to solve them rather living for individual states.