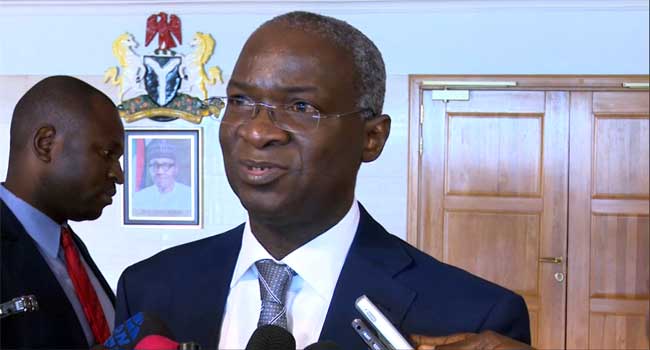 The Minister of Power, Works, and Housing, Mr Babatunde Fashola (SAN), has said that he is not fighting with the National Assembly but only had a mere misunderstanding with them.

Mr Fashola told State House correspondents on Tuesday that his disagreements with the lawmakers over the ministry’s budget should not be misconstrued as a personal fight but one geared towards finding best ways to implement the Economic Recovery and Growth Plan.

The arguments began when the minister criticised the National Assembly for allegedly inserting projects outside the purview of his ministry in its budget and slashing allocation for key projects such as the Lagos-Ibadan Expressway in the 2017 Appropriation Act.

“There is no problem between me, as an individual, and the National Assembly. And let me make that very clear, many of the Senators and honourable members are my personal friends. So, you don’t fight your friends,” he said.

Mr Fashola, however, admitted that there is a disagreement between him and the lawmakers.

According to him, the disagreement had to do with the Economic Recover Growth Plan launched by President Muhammadu Buhari.

He explained that although the leadership of the National Assembly expressed “enormous support” for the plan, there is a disagreement over how to implement it.

“Now, there is also a disagreement, which I don’t think should make us disagreeable, about the best way to implement that plan. And I think that is all that there is to it,” he said.

The minister added that while the posture or manner in which both parties had approached the issue may give an impression that they were fighting, that was not the case.

“It is, perhaps, possible that in the heat of the moment, while trying to canvass our different positions, we are misconstrued as fighting but I am not fighting anybody,” he said.

“I have a disagreement; it shouldn’t make us disagreeable. And the way I see it, even in homes, between husband and wife, there are disagreements about which school their children should go to, how much to pay for education, how much to spend on food. That doesn’t mean they reach out for the divorce courts.”

Stressing that the lawmakers also represent him as a citizen and his role is to engage them for the growth of the country, Mr Fashola said, “This is the issue really. So, even if I have been misunderstood, my intention is not to quarrel with anybody but to see a better Nigeria, which I am sure they also want to see.”