Edo Govt. To Collaborate With Fida In Eradication Of Human Trafficking 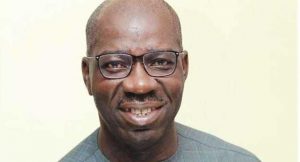 The Edo State Governor, Godwin Obaseki has assured the executive members of the International Federation of Female Lawyers, (FIDA) Edo State Chapter of his administration’s resolve to hunt down those  involved in human trafficking in the state.

Mr  Obaseki gave this assurance when he received a delegation from FIDA led by its chairperson, Mrs Maria Edeko at the Government House in Benin City, the Edo state capital.

The governor commended FIDA for it’s efforts in combating most of the ills in the society such drug abuse, prostitution and so on which has constituted into bigger problems.

“On the issue of drug abuse, we will be relying on you to assist government and help to track the sources and prosecute those found trading human trafficking”.

He added that a law and order committee  expected to play an advisory role and fastrack plans to help  government in dealing with trafficking and other human rights related issues in the state, will be set up and announced next week with its members drawn from government and FIDA.

On her part, the chairperson of FIDA, Mrs. Maria Edeko insisted that one of Fida’s main cardinal objectives is to defend the rights of the less privileged in the society particularly women and children.