Akeredolu’s Wife Calls On Igbos In Ondo To Be United 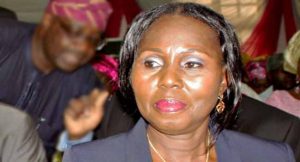 Wife of Ondo State Governor, Mrs Betty Anyanwu-Akeredolu has called on Igbos in the state to remain united, indivisible and focused in their sojourn in the Sunshine State.

Mrs Akeredolu stated this in her message during the inauguration of the Igbos in APC, Akoko north east chapter, Ikare Akoko.

The first lady stated that with unity of purpose, Igbos will definitely be in the fore front of socio-economic development in the state.

She advised the group to work hard in getting more people of Igbo origin to join the APC and strive to be part of all activities in the party.

Mrs Akeredolu whose message was delivered by the state secretary of Igbos in APC, Mr Alex Uka, charged them to avoid division.

The caretaker chairman of Akoko north east local government, Mr Rafiu Eniayewu who posited that Igbos have been supporting Akeredolu for long, implored them to feel free to mingle with other party members in the council area.

Eniayewu who assured the Igbos of no discrimination said whatever the tribe of its members, the APC is one and therefore enjoined them to go all out and woo more Igbos to the party.

He, further, assured them of equal treatment in the party saying that with their unity, Igbos could contest for elective posts in the council.

The Akoko northeast APC chairman, Bolatito Babalola charged members of the group to abide by the constitution of the party and cooperate with all party officials.

Bolatito also charged them to go home and invite all people of the Igbo tribe to the party.

On his part, the state coordinator of the group, Arinze Okafor called on indigenes to see Igbo APC members as their own and not a threat.

Okafor posited that Igbos are coming into the party not to take over the party but to give their support.

“They are not coming to take over. They will serve as a bridge between the party and the indigbos.” he stated.

Fire Guts Property Worth Millions Of Naira In Ondo