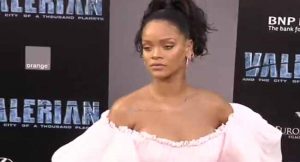 Singer Rihanna dominated the black carpet at the world premiere of new sci-fi fantasy film “Valerian and the City of a Thousand Planets” on Monday in Hollywood.

Although she only has a small part in the film as the shape-shifting go-go dancer Bubble, all eyes were on her as she arrived for the premiere wearing a pink dress with an extremely long trail.

The singer who is not a novice to movies has been featured in different movies such as :Battleship, Home, This Is the End, Annie.

The film’s lead actors are Dane Dehaan and Cara Delevingne, who play Valerian and his partner Laureline who must try and discover what is behind the mysterious force at the center of the space station which houses most of the universe’s known life.

Luc Besson came across the comic strip when he was 10 years old and has wanted to make the film ever since. The world premiere was a big moment for the French director as it was a culmination of 7 years’ production.

Director, Luc Besson ESSON said “There is no way you can build pyramids in a week, no way you can make ‘Valerian’ in a year. It took seven years, 2000 people, lots of artists and you have to work like an ant, little piece every day. It’s almost like one piece of the puzzle every day and you have to believe that at the end it will be a picture and you just have to believe it. But at the end it works, it’s amazing.”

Other guests at the premiere included model Kendall Jenner and Chris Tucker, who appeared in Luc Besson’s other sci-fi romp “The Fifth Element”.

“Valerian and the City of a Thousand Planets” goes on release in the US on July 21.